Just a quick check-in since arriving back in Toronto from NYC. A more detailed post to come from that trip – with photos! But for now…

After a few rainy days in New York it’s nice to come home and know that summer is in full swing in Toronto. And with summertime comes a (welcome) barrage of festivals in our mighty fine city. If you happen to be in town this weekend, and have an eclectic mishmash of cultural tastes like me, definitely drop by these happenings at NXNE, Roncy Rocks Arts & Music Fest, African Women Acting Festival and of course, Luminato… with a few personal recommendations from yours truly:

NXNE – aka north by northeast, this annual fest returns boasting 1000 bands on their roster this year. Where does one even begin? Well fortunately (unfortunately?) I just got back to the city yesterday so I’ve already missed out on most of the shows. What should you do at the remainder of the fest you ask? Don’t waste time scouring their website, I’ve got your Friday night well into early Saturday morning all mapped out for you.

1. déVah quartet playing at the Silver Dollar sidestage @ 8:45pm and 9:45pm. These women epitomize bringing sexy back to classical music. Love, love, love what they’re doing. If you haven’t already seen them backing up Kanye West, Diana Krall, Emily Haines, the list goes on… you gotta see them live tonight.

2. The National playing at Yonge Dundas Square @ 9:10pm. I don’t know how you’re going to fit in this band between the two sets of the déVah ladies but if you can, do it. Having just spent the last week in a Brooklyn apartment, it was nice to be introduced to some music made from that part of the world. Yes they’ve been around for a while, and yes I’ve only just started listening to their music now. What I like about this band – the lead singer has a deep baritone voice that is like a tall drink of cool water for my ears since the overwhelming trend in popular music seems to be men singing in their falsetto.

3. Suzy Wilde playing at the Monarch Tavern @ 12am. Her latest video for Flame was captured in the previous incarnation of Toronto’s Four Seasons Hotel , which if you know my love for old abandoned buildings you’ll know this gives her automatic creative cred in my books. She plays again tomorrow night too if you can’t make it out this evening.

4. The Astro Droids playing at the Detour Bar @ 1am. This funk/rock trio will give you your second wind of the night with their hard-hitting grooves. First time NXNE-ers, they’ve been making the rounds on the Toronto circuit for a couple years now playing venues like Horseshoe Tavern, and the Drake Underground. Have a listen to their latest single TAXI, it’s super fun and you can download it for free here. And you might even recognize a cameo of a certain clumsy cognoscenta in their latest cover video featuring some GORILLAZ tunes.

5. WANNABE playing at BLK BOX @3am. In case you haven’t figured it out, this is a Spice Girls Tribute Band. A little guilty pleasure from my tween years, and since Vic Beckham/Posh Spice announced she will never again “sing” in public, this is the next best thing. They’ve got costumes, choreography and the whole live band thing going on.

Shout-outs to D-Sisive and La-Nai and the Free People who played their shows before I got back. But they are local talent so you can keep tabs on when they’ll be playing in Toronto next. 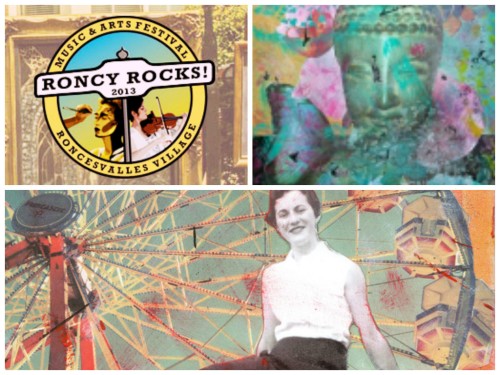 roncy rocks – feels more like a grassroots street fest compared to some of the other events going on in the city this weekend. Held on and around Roncesvalles Ave in the west end of Toronto, activities will run from 11am-8pm on Saturday June 15. When you’re down there, make sure to stop by and check out the artwork of mixed media artist Josée Duranleau. Her booth will be situated around 25 Fermanagh Ave. I’ve been eye-ing one of her pieces for a little while now, how cool would one of these be hanging in my wee studio apartment? And fun fact – Josée actually trained as a classical flute player before discovering her many other creative talents!

awa festival – tucked right in amongst the established fests going on this weekend is the inaugural African Women Acting Festival happening at the Daniels Spectrum on Saturday June 15. One of this fests artistic directors, Sonia Aimy Oduwu, was originally scheduled to perform at rock.paper.sistahz this year but couldn’t make it (understandably as she was prepping for her own festival!) so I’m looking forward to checking out her work at AWA. Definitely going to drop in for the Head Wrap Workshop from 2pm-5pm – how cool!

luminato – this festival is a biggie and today kicks off the opening weekend for 10 days of larger than life programming. Will try to post again next week for a more thorough report on the offerings this year. In the meantime, make sure you check out Concerto for Piano & Pasteboards and The Life and Death of Marina Abramovic as those performances will be over come Monday.

So what are you going to be up to this weekend? Let me know in the comments below. If you have great summer festivals happening in your home town I’d love to hear about them! And make sure you tell me if you do come out to any of the happenings in this post.

Wow that took longer than expected. On my way out the door! Hope to see you out and about this weekend…